There are instances where you get a comma-separated list of keys in each row of a table, and you need to replace it with lookup values. This blog post shows two ways of addressing this situation in DAX. But first, why would you want to do it in DAX?

Most people would likely say that the model is wrong and you should change it somehow so that each row contains one key only, which is probably what should happen in an ideal world. However, as Marco Russo says on Lars Schreiber’s SSBI-Podcast (around the 26:35 mark):

There is a market—there is a need of people who create short-term business intelligence models.

Side note: have you ever thought that Power BI podcasts would become a thing? Me neither, and yet it’s great that Lars started them!

There could be different justifications for “short-term business intelligence models”. For example, you could be simply exploring data and seeing whether it’s interesting. At the same time, you could be working with a painfully slow data source, so using DAX would be much quicker than Power Query.

In other words, it doesn’t always make sense to build a model perfectly: you should do the cost-benefit analysis. If you’re sure that the model will be there for a long time, then by all means you should do it “properly”.  Sometimes that means using tools other than Power Query. In other cases, you just want to do things quickly so you can progress in your analysis further, so using DAX makes sense.

You can see both of them in the top image in this blog post.

One way to address the issue is to create a calculated column. This one will do the trick:

Most solutions have a secret sauce; in this case, it’s the creative use of the parent-child DAX functions 🙂 Here’s what the formula is doing for each row of the table:

Note that if you’ve got spaces after the separator or a different separator, you’ll need to account for it. TRIM can be helpful here. 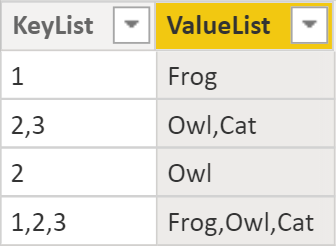 Depending on your business requirements, this may not be appropriate, especially if you want to filter the text values without using the “contains” logic. In this case, the next method might suit you better.

Another way of addressing the issue is to create a bridge table like so:

Since we’re now operating in filter context, we need to generate row context. We can do so by using GENERATE and iterating through distinct KeyList values. The AsPath and KeyPositions variables are the same as in the previous method. In the Result variable though, we’re effectively splitting the list into a table of values. 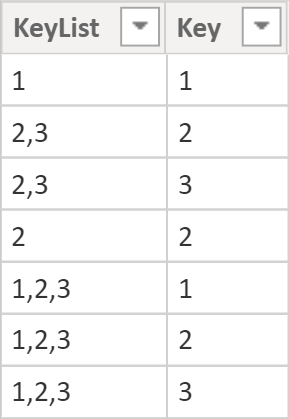 If you’re a purist and want Key to be integer, you can set the third parameter of PATHITEM to INTEGER.

Once you have this table, you can relate it to the KeyList and Key tables, so you can filter KeyList by Key like so:

Note that it’s important to use DISTINCT or ALLNOBLANKROW in the bridge table because VALUES or ALL will result in the circular dependency error.

A curious reader might ask, “Why are you using the KeyList[KeyList] column? It’s text, isn’t it? Wouldn’t an integer key for the table compress better?” My answer is–maybe, it depends: