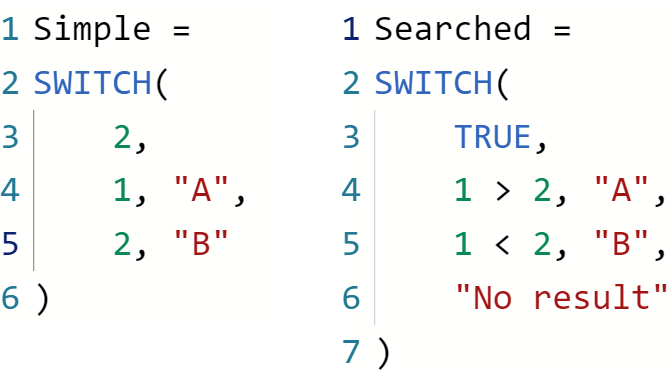 Ever wanted to mimic the SWITCH function from DAX (or CASE ... WHEN from SQL) in Power Query, including the SWITCH(TRUE... behavior? In this blog post, I’m providing a function that does just that.

There’s a great function in DAX called SWITCH; if you’re unfamiliar with it, I suggest you read the DAX Guide entry on it, since it provides several examples.

For the purposes of this blog post, I’d like to point out that there are two ways to use SWITCH:

Several people have already written their versions of DAX’s SWITCH in Power Query — Imke Feldmann perhaps most notably. As far as I understand from the comments, Imke’s version didn’t solve the SWITCH(TRUE... problem. Besides, I’m not fond of its syntax, since you need to enter values and results as separate lists:

Other implementations that I could find on the web were similar to Imke’s.

I wanted to mimic DAX’s syntax as closely as I could: I wanted to enter the value to check, then values and results, as well as the optional else result all in one go, not as separate parameters. To balance the complexity of the function and user-friendliness, I settled for one parameter of type list.

You can paste the following code as a blank query and call it Switch:

Below you can see a simple and searched Switch examples, respectively. Both output “B”:

Feel free to provide your feedback and happy switching! 🙂