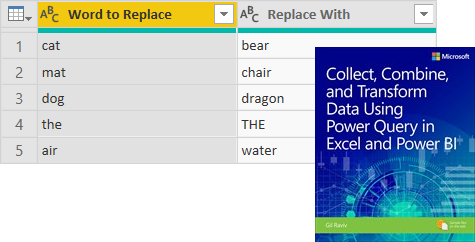 In my previous blog post, I wrote about the then-new M function, Text.ReplaceAll. Unfortunately, this function is not available anymore. A certain someone from Microsoft contacted me and said that this function was made visible by mistake; it was part of a certified connector and should not have been exposed. They were kind enough to provide the actual code behind the function though. I was quite impressed by the way the function was written, and I decided to run a competition (with a prize!) to write the improved version of the function in the shortest possible way.

To recap, the function performed multiple text replacements, which was exactly what Chris Webb‘s and Ivan Bondarenko‘s functions also did. Imke Feldmann‘s implementation of a similar function was different: it replaced whole words only.

In this competition, contestants need to write a function that combines both techniques, depending on the value of an optional parameter.

In the file, the Starting point query contains some sample text, and the Dictionary as list query should be used as the second argument in your function.

The Dictionary as table query exists purely for your convenience.

When the third parameter is true

When the third parameter is false, null or omitted:

Given that this is a competition that involves Power Query, I thought it would be appropriate to have a Power Query book as a prize. There are not that many books on Power Query; Gil Raviv’s book, published by Microsoft, is the latest book on the topic, and it includes many exercises to further improve anyone’s skills.

Gil was very kind and provided a digital product voucher for his book, which you can redeem at Microsoft Press Store, or you can give it to someone else! 🙂

I may publish your code here once the competition is over. I would also prefer to publish the full name of the code author — please let me know if you’d like to stay anonymous. Also, please send me a LinkedIn/blog/website link if you’d like me to link your name.

In total, I’ve received submissions from eight contestants (in order of submission):

Unfortunately, I was a bit unclear in the rules: I didn’t specify whether declaring parameter types is mandatory. For this reason, I decided to count the lengths of function after the first occurrence of “=>”, excluding non-essential whitespace characters.

Some functions below may still have non-essential whitespace, which I left for readability purposes but excluded it when counting the length of functions.

Maxim is a Microsoft MVP in the Data Platform category (profile) from Russia, who has a blog called Excel Inside and tweets as @Hohlick. Here’s his formula:

According to Maxim, this is a “typical Excel approach” to replacing words. It uses the List.Accumulate function, which is a perfect fit here. You can read more about the function in Gil Raviv’s blog: Power Query List.Accumulate – Unleashed.

Imke, who is from Germany, is also a Microsoft Data Platform MVP (profile). She blogs at The BIccountant and tweets under the same name — @TheBIccountant. Here’s Imke’s approach:

Great minds think alike! Imke’s approach is similar to Maxim’s, she just chose to define the steps a bit differently. Maxim saved a few characters by putting the result directly into the in statement, while Imke used a separate variable for that, e.

Bill (LinkedIn) is a very knowledgeable Polish expert on Power Query, who has a YouTube channel and is a moderator on the largest Polish Excel forum — ExcelForum.pl. You may also have seen his comments on Power Query all over various community websites. Here is Bill’s formula:

Again, the approach is similar, but there’s an important difference: instead of using the let/in construction, Bill uses fields of a record, then calls a field. Not something you see every day!

We see List.Accumulate again, and Aleksei decided to rename the parameters, which added a few characters.

In this code, there’s List.Generate, which requires many more characters than List.Accumulate — at least because the result is a list, so you need to pick the last item.

Note that Andrey is using “if ReplaceFullWords” here without “= true” as most contestants use: this makes the function fail when the third parameter is null or omitted.

180 characters (not adherent to competition rules)

Alexandr is a digital marketing expert, who has a Facebook page devoted to Power BI (Power BI // Power Query // DAX) and a Telegram channel. Alexandr is the only contestant who used recursion:

Here, renaming the parameters is justified because they are referenced multiple times.

Congratulations to Maxim Zelensky, whose function is only 139 characters long!

I certainly have learned a few new tricks from this competition 🙂